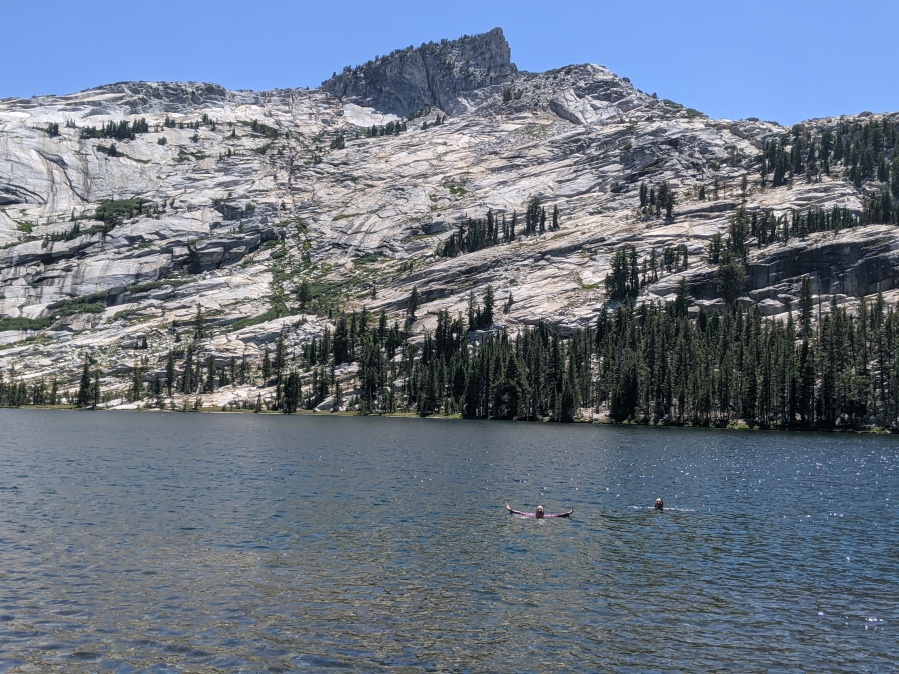 Staying Stealthy on the JMT

I mentioned a few posts ago, that I’d put in for a permit for our group to leave the PCT and hike the John Muir Trail (JMT) into Yosemite Valley. Today was the day if we were to take the detour. Well, the Yosemite NP backpacking permit system is quite rigorous and so I sort of had one, but sort of didn’t. After some chatting, we decided to still go for it since we felt like we’d gone through the whole process (even paying the fees), thought it’d be a pretty neat thing to do, and didn’t have a back-up plan for resupply anyway.

We had about 7.5 miles of flat, beautiful, along-the-side-of-meadow trail before departing from our beloved PCT. This morning, I decided to leave camp ahead of Cheer and Calzone and have some peaceful solo hiking along the meadows of the Lyell Fork. We made a plan to meet up for second breakfast. It was lovely.

We found a nice little breakfast nook complete with a log to rest our backs against. The only downside was an invading critter that I had to intimidate and scare away. I believe it was a native Tuolumne striped-back chipmunk intent on having a nibble or two of my oatmeal…

As we were finishing our breakfast, two National Park rangers hiked down the trail and chatted with us for a while. I was a bit nervous about our whole permit/detour idea, but fortunately we were still on the PCT and our long-distance permits were satisfactory to them. In fact, we had a lovely chat and it got me thinking that their jobs seem to be pretty nice, just hiking through the forest chatting with folks.

It wasn’t long after starting to hike again that we made it to the junction and took the JMT split towards Yosemite Valley. For a while our trail stayed forest-covered and seemed to run parallel to nearby Tioga Road, but eventually we turned away heading towards Cathedral Lakes. The trail thought it’d be a good time to start going up again too! And we started seeing the characteristic Yosemite domed granite peaks…

Today was a particularly special day on trail. It was Calzone’s birthday! To celebrate, we took a nice long lunch break at Lower Cathedral Lake. After finding a nice slab of rock to hang at, we all went for a swim 🙂

After lunch, we continued climbing upward through the Yosemite backcountry. It was quite beautiful. There was one spot where we stopped for a break that I saw a nice place to scramble up for a 360 degree view!

We camped nearby to Sunrise High Sierra Camp, but still stealthy-like and far away from the actual camp so as not to bother folks staying there. I’d say it was quite the spectacular campsite. One of my favs for sure, especially since I cowboy camped and the stars were outstanding. Calzone even did some experimenting with her camera to try an catch the vast night sky!