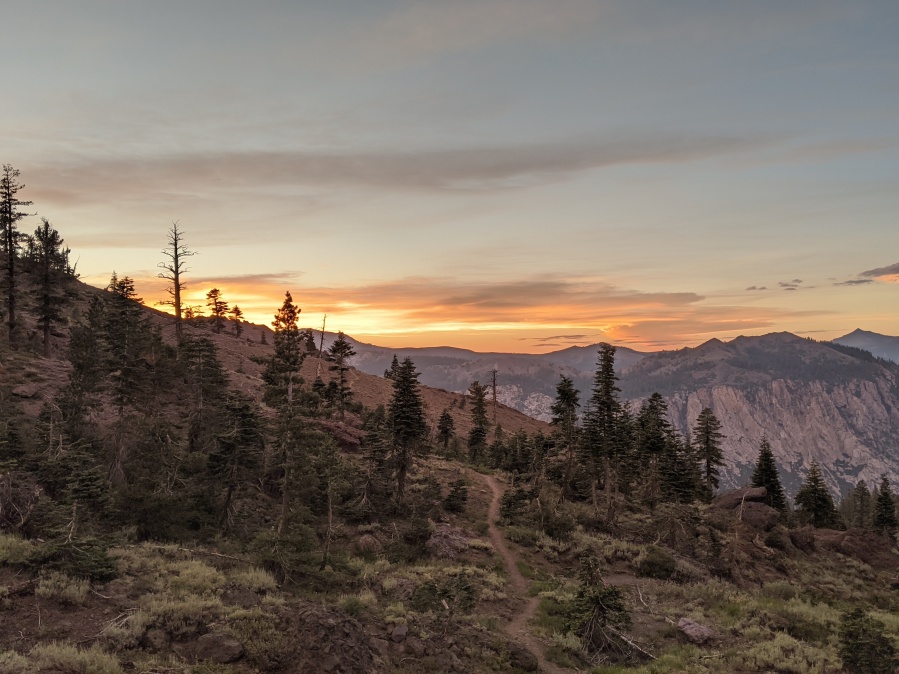 “A journey is a person in itself; no two are alike. And all plans, safeguards, policing, and coercion are fruitless. We find that after years of struggle that we do not take a trip; a trip take us.”

– John Steinbeck in Travels With Charley

I returned to Michigan in October of 2019 having spent more than 6 months completing the Pacific Crest Trail (PCT). My trek didn’t resemble the path I’d originally imagined (a continuous footpath from southern terminus to northern terminus), but it was my own spectacularly unique hike and I have no regrets about the way in which I managed to piece it together.

Throughout the 2019 PCT journey, conversations about life after the trail came up, especially as my friends and I neared the end. And on those occasions, I remember telling them that I didn’t see myself being pulled into the thru-hiking lifestyle, like so many others, having a burning urge to get on the next trail as soon as possible. Instead, I vowed to return to the default world (as one of my hiker trash friends liked to call it) and rejoin society in the typical approach of going back to my career or finding a new one and such. Once back, I didn’t really understand it at first, but soon realized that I had been wrong…I craved trail life.

It is a known thing in the long-distance hiker community that after taking on such an adventurous and exciting journey like a thru-hike, many suffer from what’s called post-trail depression. How do you fit back into a world that seems so different from the simple rhythmic one you’ve just left? On-trail, so much makes sense and seems right and off-trail that’s just not always the case. I don’t think I’d give my situation the post-trail depression label, but without a doubt it was a drastic change that was hard to deal with. On top of that, I had started my 2019 PCT trek soon after a tough divorce and despite all of the growth I made while on trail, I was undoubtedly still dealing with it. I am very fortunate to have a solid support group and to be straightforward, live a very privileged life. These things make a difference. Even so, I found that I was wandering just as much being off-trail, as I was when I quit my job to head out west and start walking through Southern California. In fact, quite similarly, my mind was once again looking to the wilderness for answers.

“The time to do a Grand Tour was now, when you’d made some mistakes, gotten some scars, some battle damage from life, and you could think about all that stuff out there. But could people do that at my age? Were we all too saddled with obligations by the time we were in our thirties? I was a late bloomer. If I had gone on a trip like this when I was 23, would I have lived the same way, not gotten a mortgage or a car payment, and been free to do this again late? Would I have seen that I could live with less, and avoided the house and the car and the dog and the kids this long? Everybody needs a Grand Tour. When they need it, I don’t know.”

In my wanderings, I found my way to the western suburbs of Chicago and spent half a year living in an apartment with my best friend and former college roommate. My life had taken such a drastic turn after my divorce…I never would have thought my friend and I would be making memories as roommates once again. And so I tried my best to step back from things, embrace what a peculiarly special instance this was, and be grateful for the times we shared. We went through the early days of Covid-19 together and I was so lucky to have a friend during those times. Even so, I could feel it…this place wasn’t my end game.

In January 2020, members of my trail family (Snickers, Calzone, and Cheer) all applied for long-distance hiking permits through the Pacific Crest Trail Association. A group of us had kept in touch since being off trail, texting back and forth and occasionally doing a video chat, and these three had it in their minds to get back and finish the trail in 2020. Each had about 300-400 miles left of the Sierra Nevada section of the PCT to hike. So, naturally, I thought it’d be silly of me to miss out, and so obtained a permit as well 🙂

In the spring of 2020, Covid-19 exploded into the world, politics was creating a canyon-sized divide among us, and the deaths of George Floyd, Breonna Taylor, Ahmaud Arbery, and others caused social upheaval bringing to light problems of systemic racism. Our PCT dreams took a backseat. For a while, it seemed that my friends were not meant to finish the trail this year. We continued to research though, chatting every now and then and scheming of plans and ideas to make it work safely. With less than a month before our permit start dates, we still hadn’t made the call. Finally, with about three weeks left, we let ourselves commit.

The decision to still hike in the summer of 2020 didn’t come lightly. I’m sure there are those who think it was horribly irresponsible. I’m not going to try and change anyone’s mind, but feel it’s important to acknowledge that each of us thought long and hard about it. We each had an array of life circumstances and events that brought us to the trail in the first place and the same goes for getting us back to it again. In my opinion, the trail is a place of healing and peace, a place of reflection and pondering, and a place to find hope and to renew one’s spirit. The world can be a dark place, and in such times, I feel we all need to go to those places, people, or things that we’ve found offer some brightness. A friend of mine I met on the PCT posted on Instagram about her thoughts behind hiking New Zealand’s Te Araroa hiking route in 2020…

“I am at the point in my life, where this feels like both the most liberating option and my lifeline. A way to escape the storm. To lose myself in the wild and magnificent beauty of New Zealand. And so I grabbed it. And that’s why I’m out here. To escape a reality, but also to try and find my way forward.”

I resonate with this so much! For me, it’s the natural spaces, the wide-open spaces, the woods, the rivers and streams, the mountains and canyons that allow me to become centered once again. Our 2020 trek was a chance to get away for some self-care, but also a form of meditation and an opportunity to reflect on what’s important to us and how we might act within the messiness of the world.