“I plumped down on a log, sucking in the thin mountainous air and listening to my heart thump in my chest. I thought to myself… I can’t go on!”

I was happy to have been hidden in my little tree grove overnight, the wind was howling above. Packed up my tent and pack and started walking at 6:30. Right away, the trail started climbing. This would be the theme for the day.

Around 7:00 I came to a fork in the road. The path to my right led down a mile to a water source, straight continued down the PCT to Canada, and left went to a water source .25 miles away, but was reported to smell a bit sulfur-like. The water sources further up the trail looked scarce, so I dropped my pack, grabbed my bottles and filter and opted to go down the shorter trail to the smelly water.

It was steep and rocky, but I made it down quickly. It seemed to be a good flowing spring (don’t be alarmed by the algae, that’s just from the stagnant tank water). I filled my “dirty” bottle right from the water pouring out of the pipe, then transferred into my clean bottles by squeeze filtering. I didn’t even notice any funny smell or taste.

I filled 3 liters, then began the climb back up to the trail. This was much steeper than any part of the PCT, but was manageable without my pack on. Once at the top again, I found a little nook hidden from the wind and cooked up some oatmeal (maple and brown sugar) and coffee (Starbucks Columbian). 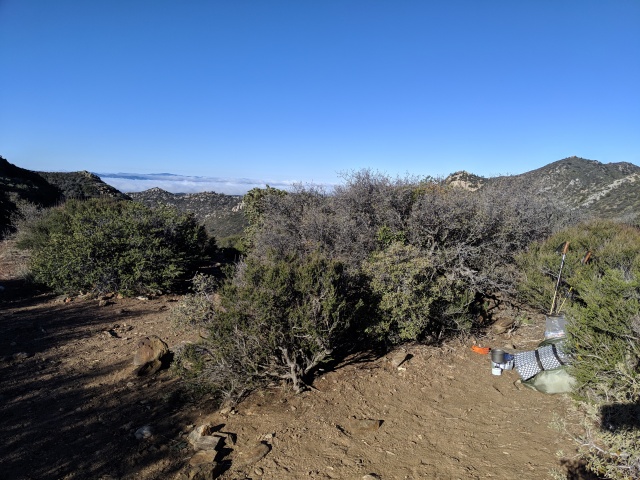 I felt nourished and ready to do some serious hiking. As I mentioned in my last post, I had heard other folks discussing big mile days. I have kind of a hidden competitiveness within me. If I take a second and reflect, I think of my childhood and how I had to get the blue ribbons for the old Presidential Fitness Tests, had to pin my rival in wrestling, wanted so bad to win every soccer tournament! Maybe it’s been dormant for a while, but that competitiveness seemed to have awoken when I heard about these youngins hiking so much.

Needless to say, in the morning I got it in my head that I wanted to do something in the 18-20 mile range today to kind of prove that I could hang with these people…the trail had other plans for me.

I got up into some higher elevation than what I’ve experienced on the trail up this point, so views were great! And I keep getting closer to that dang snowy mountain ahead. At a certain point, I came into a section of burned chaparral skeletons. Their light grayish wood even looks similar to bones, except where charred black. This section had been closed down for five years due to a wild fire and this is the first year they’ve re-opened for hikers. Here’s an article about it for those interested…

How we re-opened the Pacific Crest Trail above Idyllwild, Calif., 5 years after it was destroyed by wildfire 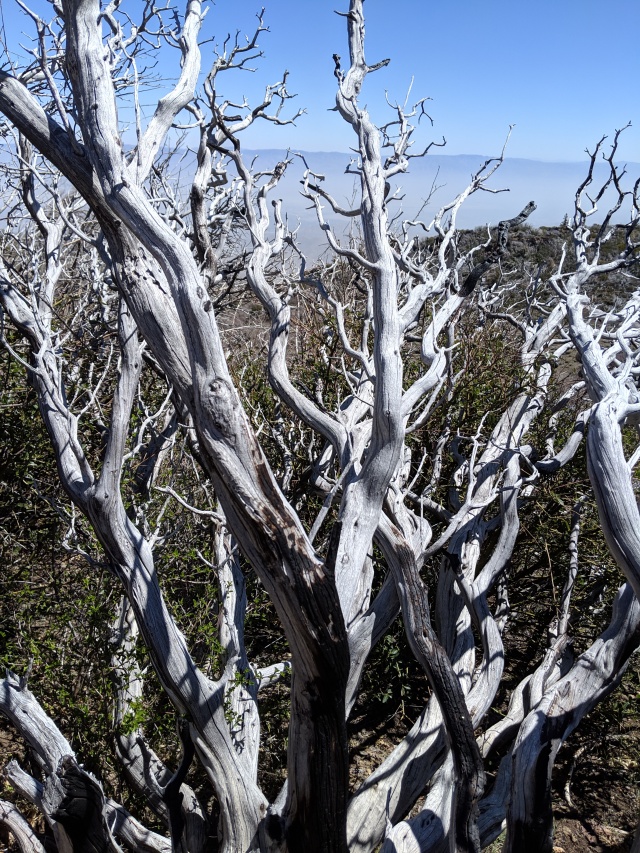 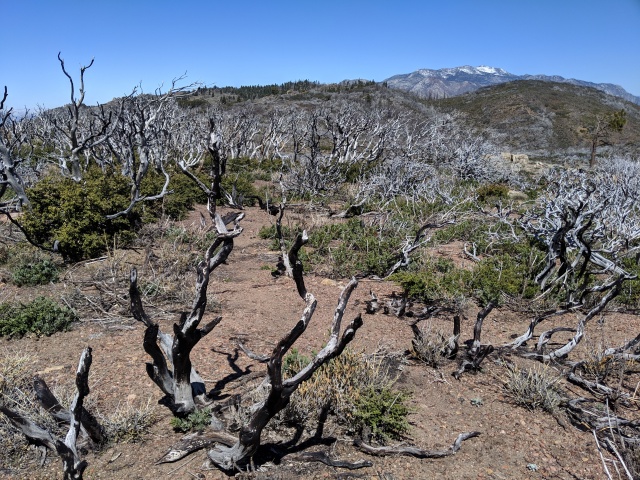 Then, it became a burnt pine forest area (I took a lot of photos today)… 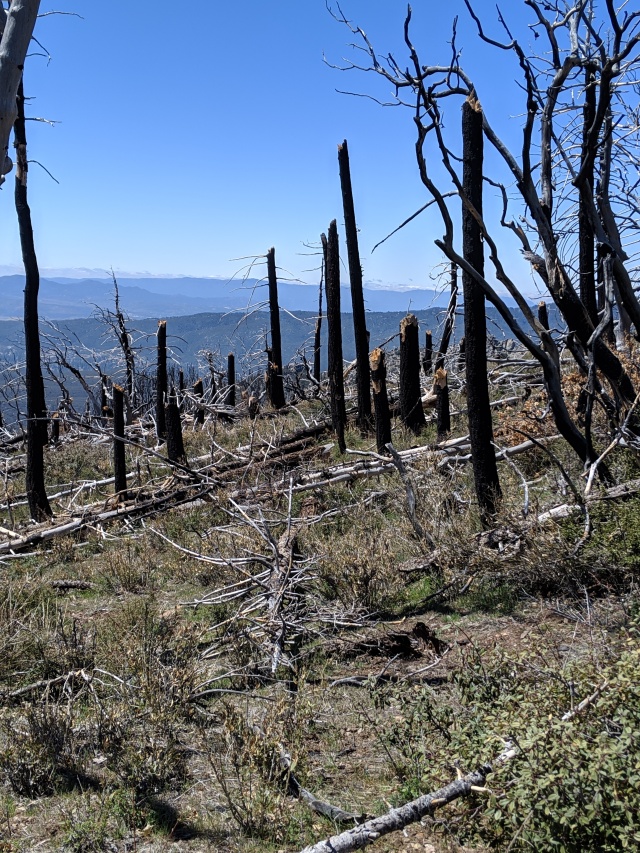 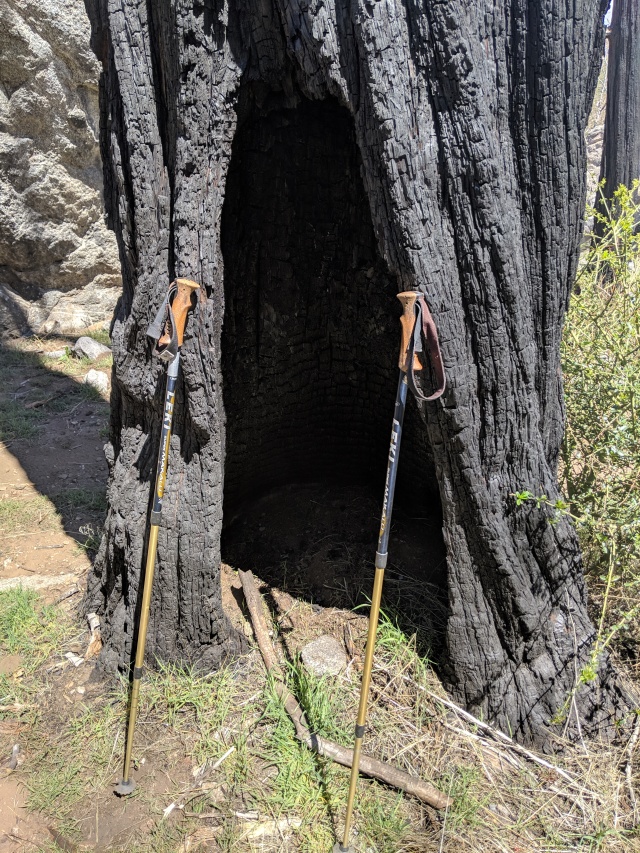 There were a ton of downed trees across the trail, which caused a re-route either up or down hill to get back on the trail… 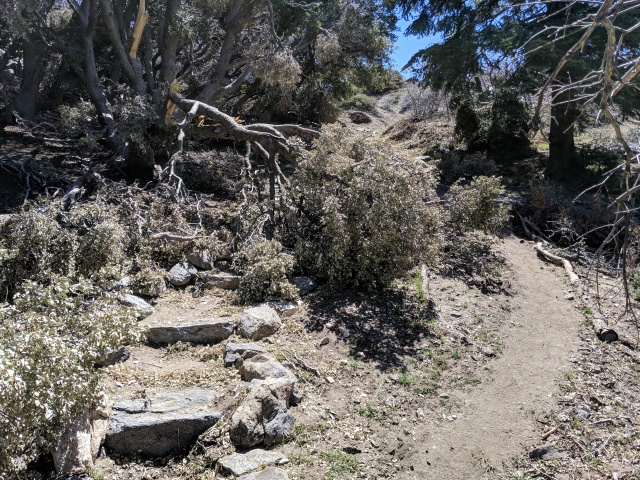 And sometimes through it! 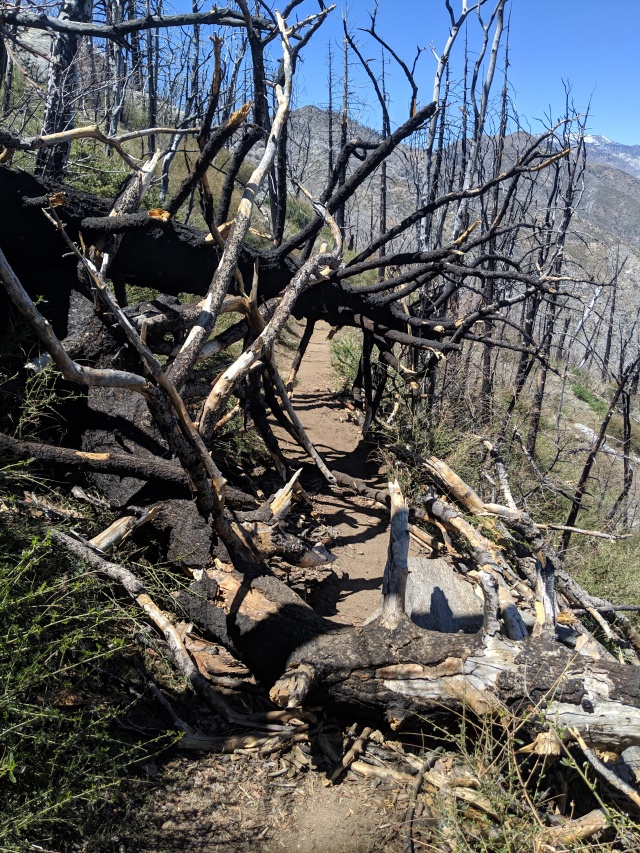 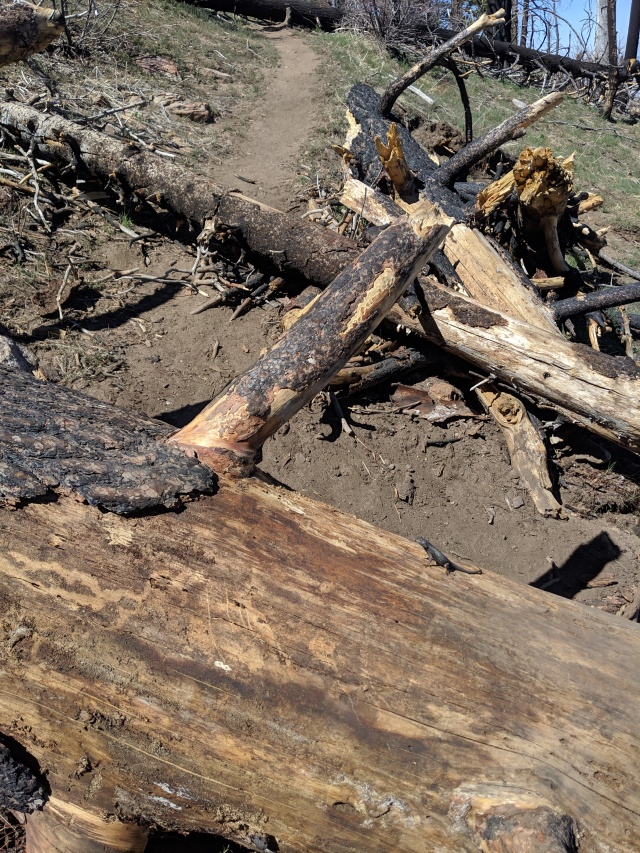 Took an hour lunch on top of a flatish boulder. I’m slightly embarrassed of what I concocted: a tuna, creamy chicken ramen, roll-up. But that seems to be the way of most hikers, being creative. This is experimentation week for me, and I hope to do better on my next resupply! 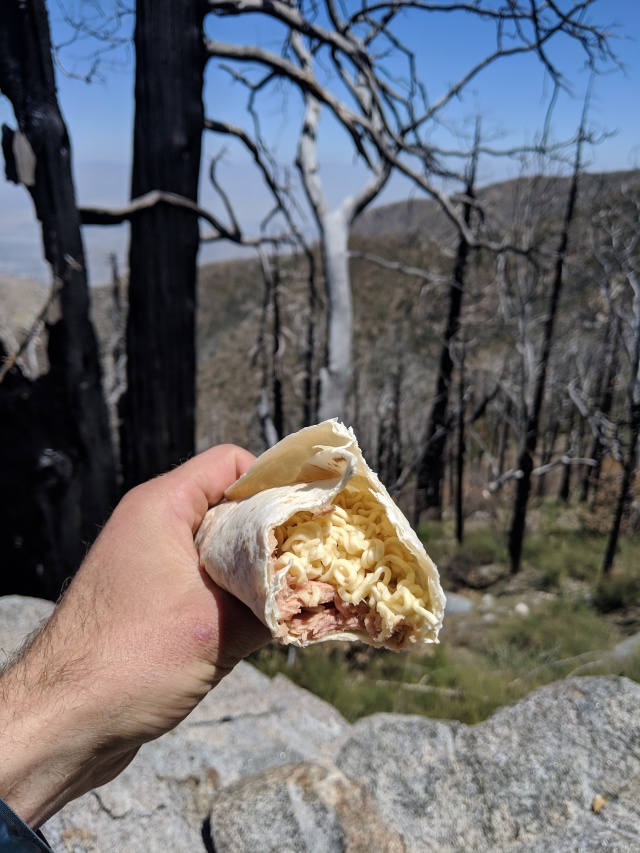 For a lot of the day, I was looking down at the city of Palm Springs. About 6-7 years ago, myself and a few members of the Hoekwater and Prins fams stayed their and did a desert oasis hike to a small waterfall! Check out these troopers! 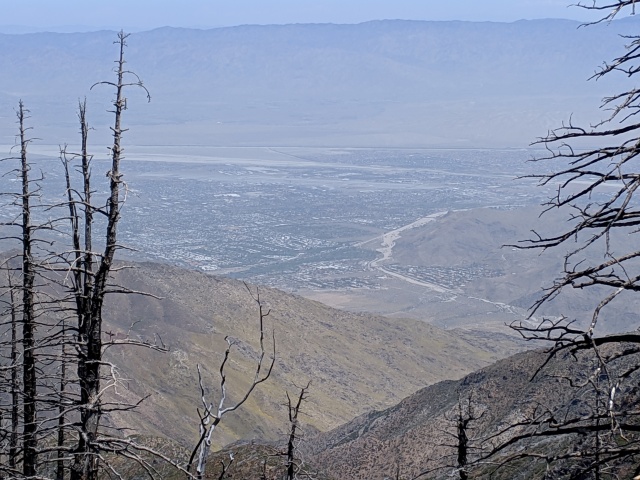 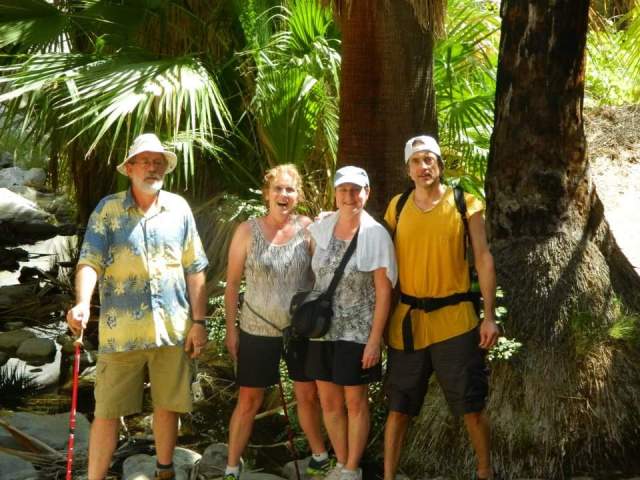 Around 3:00ish, I ran out of water, but came to a new fill-up spot. The problem was it was another side trail, maybe a half miler, and when I approached a guy was just returning. He had his shirt off and used some rather foul language to emphasize his feelings about the situation. And so down to the water I went. It was a bit of a mess, very steep and trees fallen all over the place. It was hard to follow the trail because there were several routes. Eventually made it. Just a little trickle from Apache Spring…

The way up was a struggle. I had 3 liters of water and set off. Slowly, I scrambled and climbed. I plumped down on a log, sucking in the thin mountainous air and listening to my heart thump in my chest. I thought to myself… I can’t go on! My super tuna ramen noodle wrap gave me the energy I needed though and soon enough the trail began leveling off to where I’d dumped my pack.

I had a snack (crumbly cherry Pop-Tart) as a victory celebration, then saddled the ole Granite Gear Crown 2 on my hips, and took off down the trail. This next stretch was amazing. Such cool mountains. And, I got into my first little snow patch at around 7,300 feet! 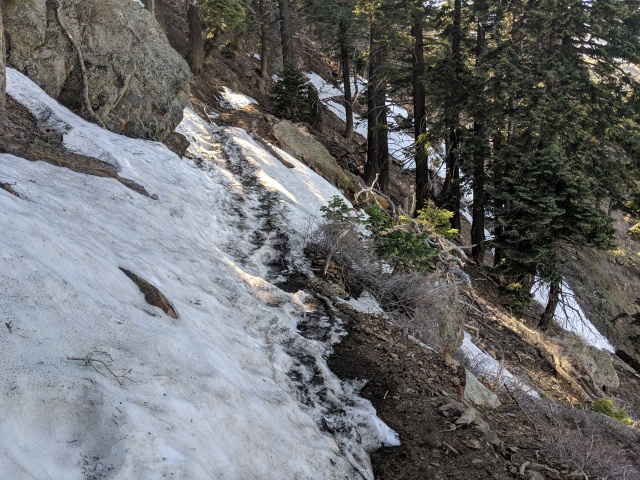 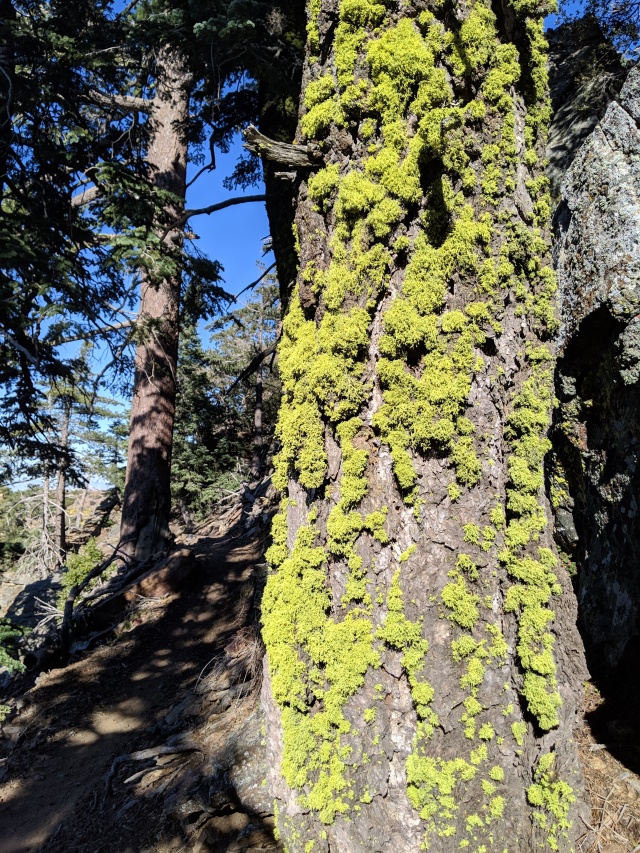 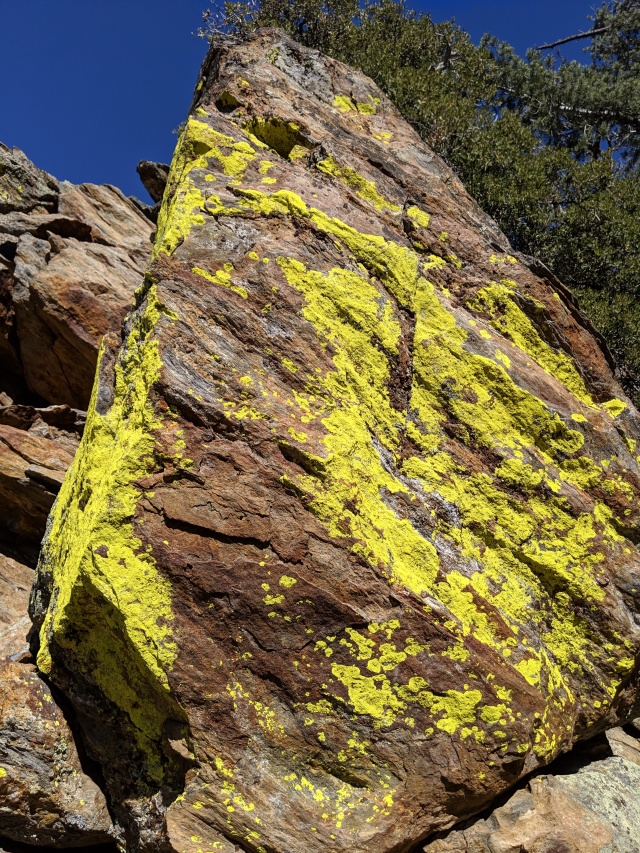 I stopped at mile 171 (14 miles). The trail kicked my butt today and I had some jello legs going at the end. From the sounds of talking with folks along the way, it got all of us. I camped with a group of folks and we all kind of lined up making our crummy dinners. Mine was somewhat Easterish being cheddar mashed potatoes and ham (spam). I believe these are the names of the squad from left to right: John, PB and J, Kieth, Audri, William, Michael, and Hannibal: 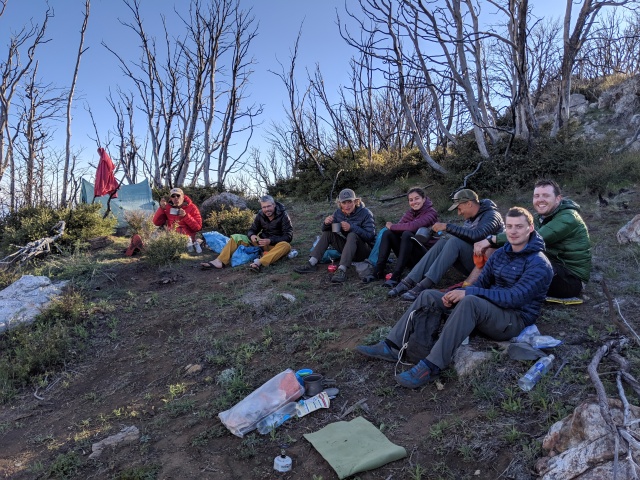 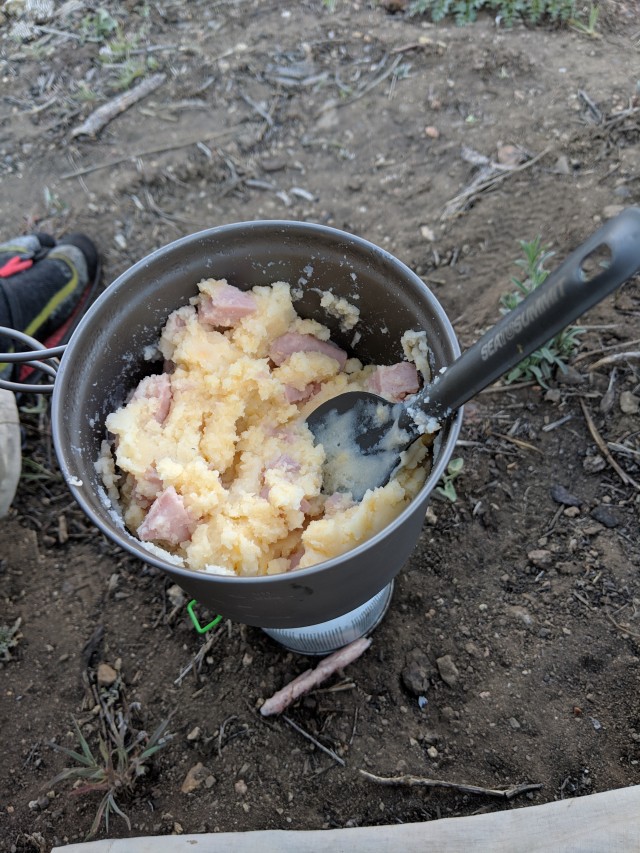 All in the tents early. Very tired and looking forward to seeing what challenges and joys the trail and town of Idyllwild have to offer tomorrow!