I did my best to sneak out of camp so as to not disturb Gaper (another hiker who’d joined me at camp last night) in his slumber. I was pretty motivated right away seeing as I knew I was only a few miles away from crossing into Oregon! The views were quite nice. It was as if California, by displaying it’s beauty, was calling out to me to not to forget it.

The suspense was building… 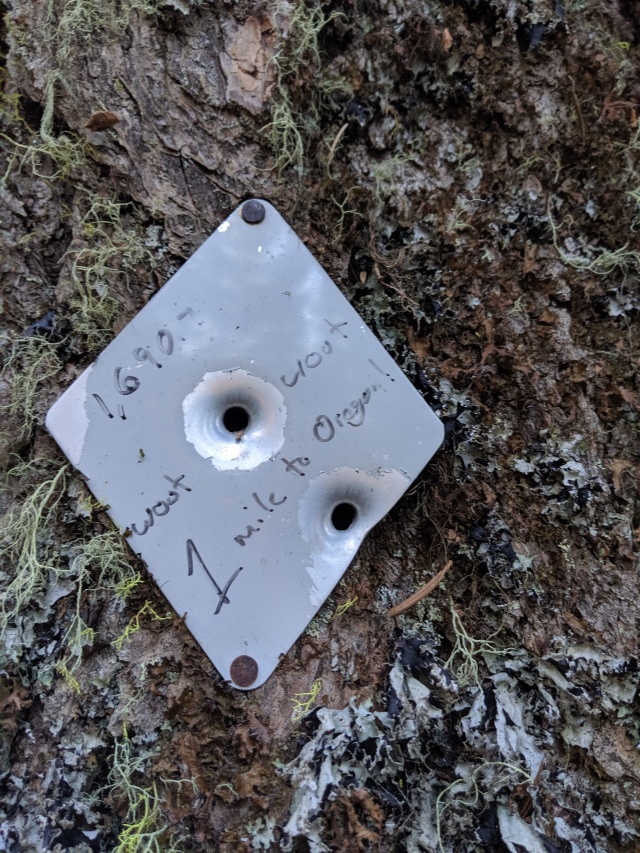 And then, the welcoming squad began banging their bells celebrating my arrival and welcoming me to Oregon!

Ok, maybe they weren’t all that excited. But nevertheles, just past these guys, I climbed one last steep part and reached the border between California and Oregon. Woot woot indeed!

No celebratory video this time around, I’ll work on that for my half way point I suppose. I even got a nice note from Calzone and Cheer and from Snickers who’d past by a few days before and written in the trail register box.

Sumi was still sleeping during all the border crossing activities, so he posed for a photo with our first view out as the backdrop… 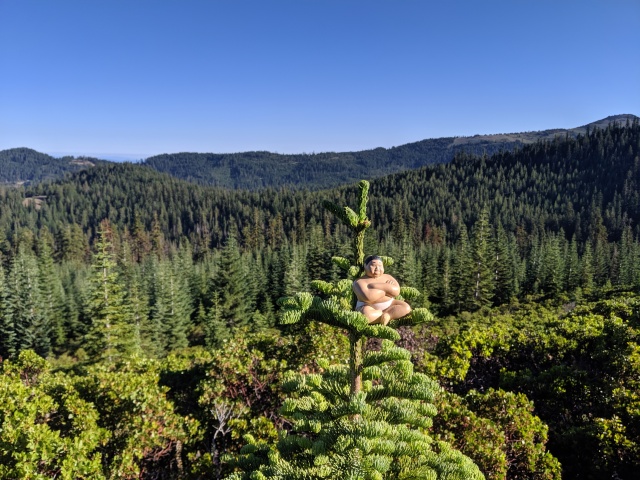 The rest of the day would be a pretty great intro. to Oregon. I saw mountain views, some turkeys, a deer (not afraid of us humans still), some of those Sierra chicken/grouse things and met some super nice day hikers and section hikers.

I also met a fellow Michigander thru-hiker, Dirty Prana (or something like that), from one of the south Detroit suburbs. She was traveling with Fugitive. Not sure if she’s actually on the run or how that came to be, but didn’t ask questions. Anyway, we leap frogged each other throughout the day until the end when I continued past where they camped. Around the same time, I experienced some wonderful trail magic!

I was walking along and there in the dirt within the trail someone had spelled out “TRAIL MAGIC”. Then, about 25 feet ahead they’d carved out an arrow pointing ahead, then another arrow, and another. Then, “BEER”. Finally, one last arrow pointed up the hill off trail. The way I felt in that moment…I mean, N’Sync expressed it best back in the day, such doubt, such anticipation. “Can this be true?” they sang, “Tell me, can this be real? How can I put into words what I feel?” Or, could my new hiker friend Fugitive be luring me into a trap?

I decided to take the risk and climb the hill to the unknown. There at the top, just out of site from the trail was a truck with it’s tailgate down and a cooler out. Two guys were chatting and as I approached, offered me a beer. So maybe I exaggerated the build up, but it was nice hanging with Euro, my fellow hiker, and Nick, the trail angel who was camping there and who’d made the signs and brought the beer.

After a bit, we parted ways and I trudged on. I won’t lie and say the one beer energized me. As one might expect it made me a little tired. I didn’t have long to go though and it was all down, so boom I knocked it out. Just before camp, someone left this message for those of us heading north, starting Oregon… 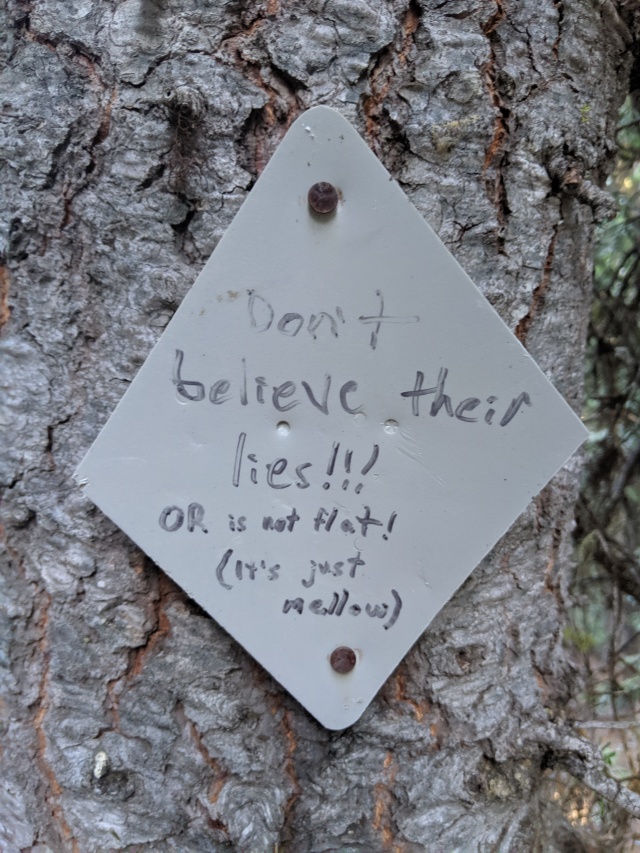 It is true, I have had idea formed in my head that Oregom is supposed to be “flat” and that I should be able to get some bigger miles in. I’ll find out soon enough! I got near enough to town so that I’d only have a few miles to go in the morning. My tent site was nice and flat, surrounded by a moss covered forest.