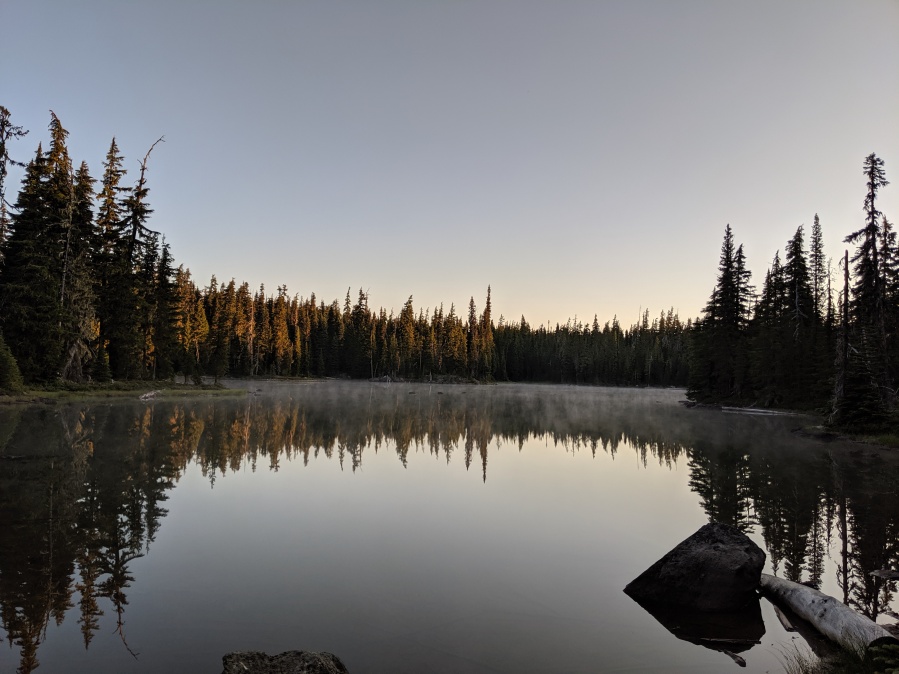 And the Thunder Rolls

I slept through my alarm this morning. Not by much…10 minutes after, I was up and going and even got everything packed up for our planned 5:30am start time.

The trail left our lake fairly quickly and meandered back into the dark shadowy forest. Still, flat ponds and lakes with mist rising off their surfaces were hidden amongst the trees… 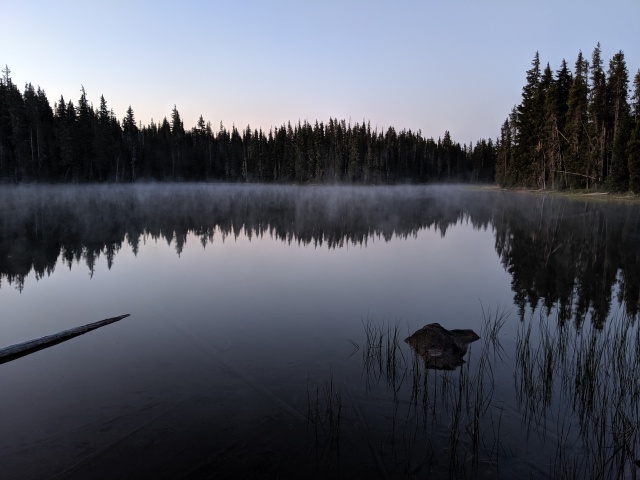 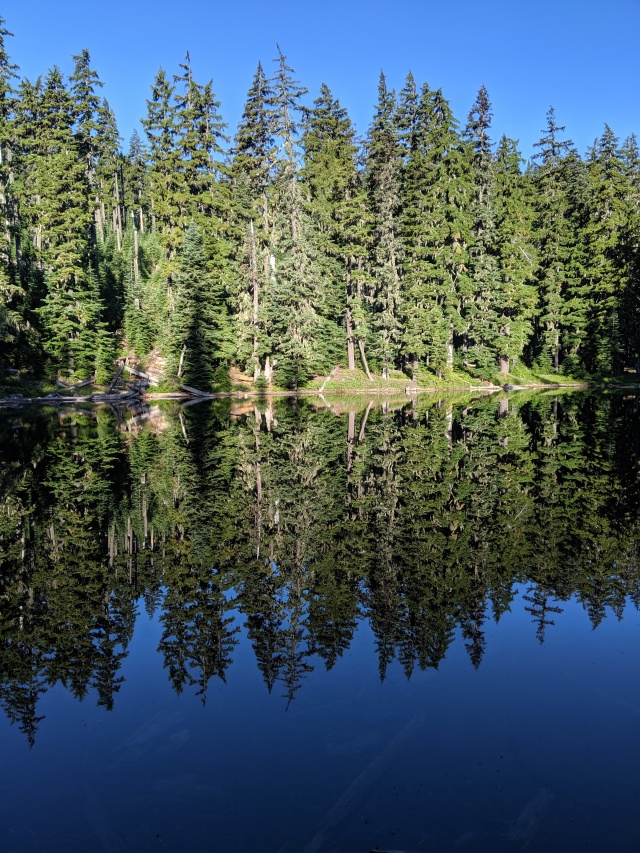 Our breakfast spot was nothing special. Just a few logs right off the trail where we tried to fight off the mosquitoes. In fact, both Snickers and I felt like we’d hit a wall. No drive, no energy. Even so, we trudged onward. It should be noted however, that my Kellogg’s Fruit Loops were spectacular. A good switcheroo from Dave H the Master Trailsman/Resupplier!

Not until we had an unexpected encounter with a southbound hiker did I get my energy for the day. It was our friend Sunny from the Netherlands who we’d both hiked with in the “desert” section of the trail! As I like to say for such occasions…we had a joyous reunion. Maybe fifteen minutes to a half hour of catching up and hearing our various tales. Her group had split up somewhat and she’d gone by herself up to the northern terminus and has been headed south ever since. It was great to see her!

Soon after this, our pal TW joined us for a while. He really got us moving at a nice pace. He’s quite tall and has long strides. It looked normal for him, but Snickers and mine shorter legs were moving quick.

Somehow we ended up getting ahead of him though, and made our way through the up and down forest and ponds/lakes to a lovely lunch spot at Dumbbell Lake.

We did our usual lunch thing, fought off a brave mettlesome chipmunk, and then opted to take a swim! As all of these lakes have been, the water was super clear and inviting. Just after I’d removed my glasses and watch and was ready to jump in, a cloud covered the sun. Didn’t phase us though and we enjoyed our swim immensely. I am a bit of a spaz when it comes to swimming, flaking around to stay afloat, but Snickers was graceful and relaxed. He’d done some lap swimming during his prep for the trail when he’d gotten shin splints from overdoing it with his other methods.

TW joined as we were drying and packing up and hopped in as well. The water was quite transformative for our attitudes, but even so, our day was about to become a lot darker…

This doesn’t show it all that well, but this is our swimming hole with dark clouds rolling in above the trees. Thunder had started too, low and quiet at first but clearly coming closer. We thought about setting up our tents right there, but didn’t like the idea of being out on this rock peninsula in a lightning storm. Seemed exposed. Thus, we got our rain gear ready and I placed my rain pack cover overtop. Then, we took off down the trail.

We got maybe fifteen minutes before it started raining. Here’s my comrades feeling the first few raindrops.

On went the rain jackets. Soon, it turned into a deluge of hail. Within minutes the trail was filled with water, pooling in the flatter areas, and flowing in a fast paced stream downhill where it was slanted taking the path of least resistance. The hail started small, but soon was the size of large Holland, Michigan blueberries. It lasted a while before slowing to essentially nothing. We had maybe a ten minute reprieve and then it started up again. This time there were even a few pieces of hail the size of paintballs (marble- sized). I had a few hit my ears underneath my rain jacket hood, which stung, but otherwise we kept plowing onward, TW leading the way!

The precipitation lasted an hour or so! I didn’t get pictures due to not wanting to damage my phone. It ended just before we reached a rare open meadow, where we were delighted to see sun! Off went the rain jackets.

We were quite exhilarated by the whole experience actually, it seemed like it was a change that we needed to breakup some of the monotony. I hate to use that word because Oregon has been absolutely amazing. But I think we had gotten ourselves into too much of the same routine maybe.

We made it out through the trees to this overlook of Mount Bachelor. (I think that’s what it is anyway).

We’d talked of a tentative plan earlier, but firmed up our resolve to make it to a campsite about 5 miles further still. Someone had made the comment in our Guthook’s app that, “I’d put this in the running for best camp site of the PCT.” That kept us motivated going up the hardest part of the day, a 3.5 mile and 1,200 feet climb. Meanwhile the thunder hadn’t stopped rumbling.

The climb wasn’t that steep and I got the chance to chat with TW some. I learned TW stands for Trojan Warhorse in reference to his hiker hunger and that he can fill up with unexpected amounts of food. More than meets the eye kind of thing I guess. He’s from near Frieburg, Germany which is in the Southern part of the country by its border with Switzerland and has worked the last while as a technician on wind turbines. After the PCT, he plans to be a paragliding guide!

While hiking we came across this big fella… 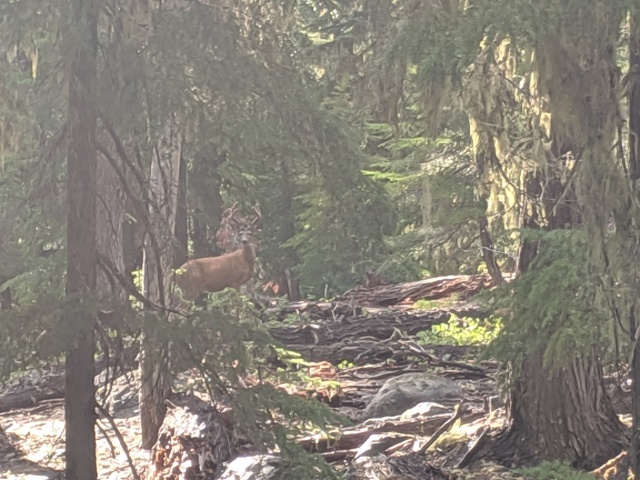 Just as we reached the “summit” where the supposed “best camp site in the entire world” was, another round of hail began pelting us. My instinct was to quick set up my tent, but thankfully Snickers and TW are smarter than I am and took shelter underneath a tree. This is how excited we were about just missing our opening to set up dry… 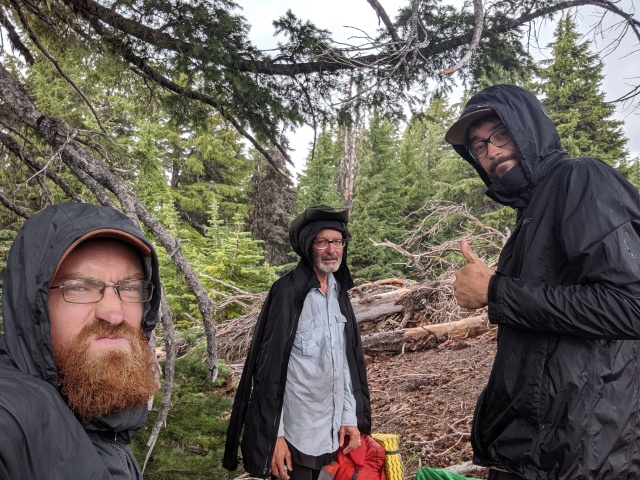 In the end, we didn’t like the site and heard from a sobo hiker that the actual site is further on a bit. We found out his name was Kevin and he ended up joining us. We all set up together. It was indeed a pretty nice place to camp. Beautiful views looking out!

Unfortunately, there were still a lot of mosquitoes and the area was wet, so we set up and ate dinner hiding in our tents. It wasnt all that bad though, we were able to chat amongst each other still, just talking louder to hear one another through the tents.

My rainproofing system didn’t work at 100% abilities today. I have my pink pack cover and a jacket and pants, but the rain seemed to go right between my back and the pack, so most of the items in the bottom were damp. I hung up what I could inside my tent, but it probably didn’t do much. We made plans to do a stop tomorrow and dry things out in what we hoped would be sun. We all thought this was a good trial run for what’s is supposed to be a much more rainy Washington.

I braved the mosquitoes for short while after dinner to have some time sitting out on the rocks looking out as the sun went down. It was nice, but in the end I was defeated by the bloodsuckers and retreated to the sanctuary of my tent! 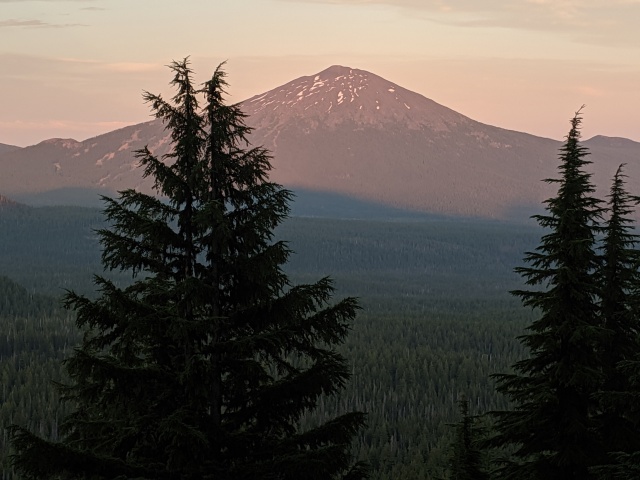