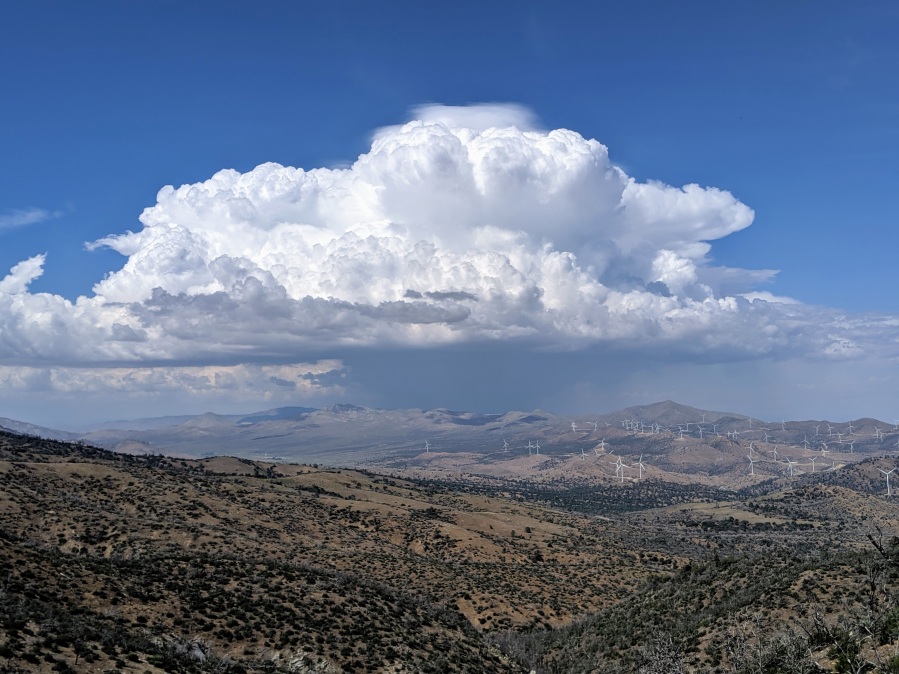 A Hiker Boy Can Survive

I got back to my old routine of getting up around 6:00am. I noticed right away that everything seemed a bit damp. I didn’t put on the rain fly last night thinking it looked like a safe bet for no rain. And I don’t think there was. I think it was all from condensation. Either way, the fly would’ve helped. Rather than wait for stuff to dry, I shoved it all inside the pack and set out to start hiking.

I was the first out of camp and passed Kool-Aid packing up on my way out. He seemed to have gotten even more condensation than I did (maybe I was under a tree?) and planned to wait to dry things out a bit. I began walking around 6:35am.

The trail went up right away. It wasn’t too steep a grade though and the sun was shining bright! So I was happy about that. It’s amazing how a bit of rain and wind will make you appreciate the sun. I thought maybe that I’d left the wind turbines behind, but that was a poor assessment. 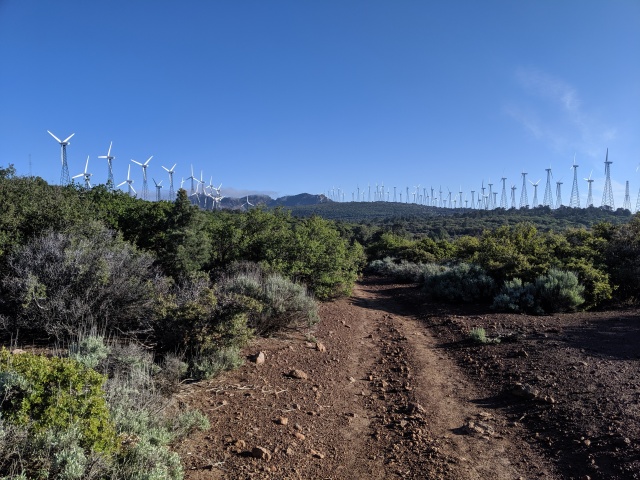 We ended up following a line of these smaller styled turbines for most of the day. I mean, I’m a fan of wind energy (see what I did there 😉) and renewable sources and all that, but it was a bit sad seeing these guys out here in this otherwise pristine wilderness. I still got some truly lovely views though! 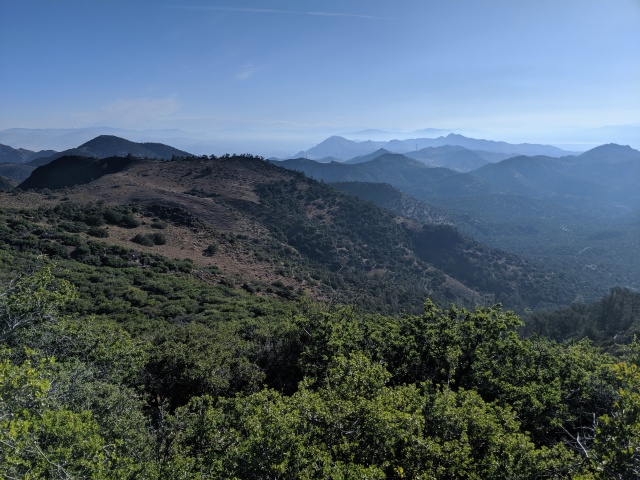 The terrain seemed to be getting more and more “rocky” during the morning stretch. Rather than smooth rounded mountain tops, they were jagged and with bold looking rock outcrops. 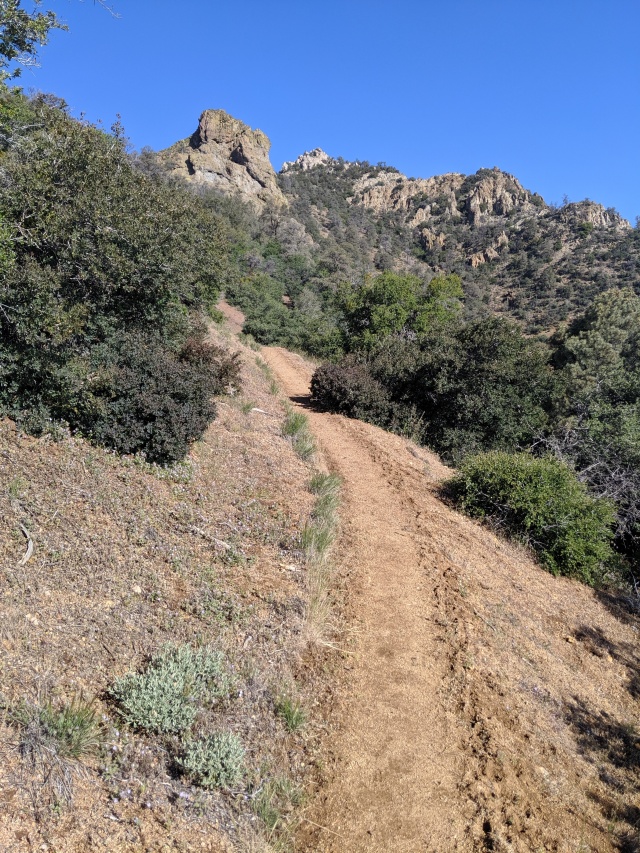 I only had a small amount of water left this morning and soon had drank it all. Around 8:30am or so, I came across a small stream that wasn’t expected, meaning it wasn’t listed as a source on my app. Thus, I thought I’d stop to fill my bottles up and let them overflow. But as the poem by Robert Burns tells, “the best laid plans of mice and men often go away.” My new bottles that I’d purchased in Tehachapi don’t fit the thread of my water filter! Not a single one of em.

Being a resourceful lad, however, I persevered over all obstacles. First, I basically took everything out of my pack and laid out to dry. Then, I began heating my water and let it boil for 12 minutes. I was fairly sure I remembered 10 minutes of boiling would kill all bacteria and such in the water, so I did a few extra mins. for good measure. Now as I finish writing this, I looked it up and according to the United States Environmental Protection Agency, 1 minute of a rolling boil should be sufficient and 3 minutes if above 5,000 feet elevation. I boiled enough for my oatmeal, coffee, and a few sips just for drinking. 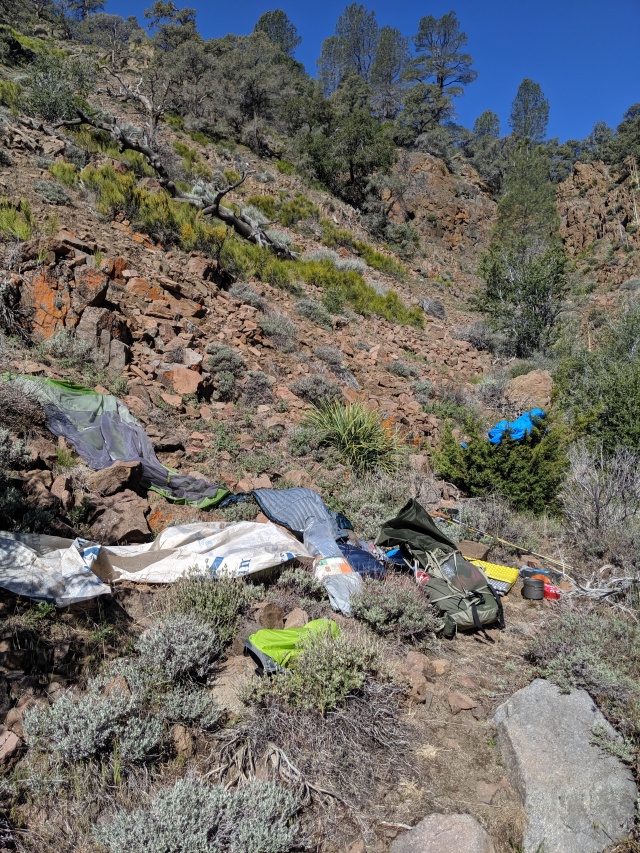 By the time I’d finished up and was almost packed up again, Kool-Aid caught up to me. I swapped one of my dumb bottles for one of his Smart Water bottles. He doesn’t use the Sawyer Squeeze filter, but instead adds some sort of chemicals to make it safe. So, I was all set again. Crisis averted.

Onward we trekked together and made it to Golden Oaks Spring. This was the water source we’d been shooting to get to. Going ahead, the next source is another 19 miles, so another big carry (that’s the lingo we use). The group of youngins from the night before and my pals from Denmark, Adam (now Prince Humperdinck) and Lambchop were there as well. 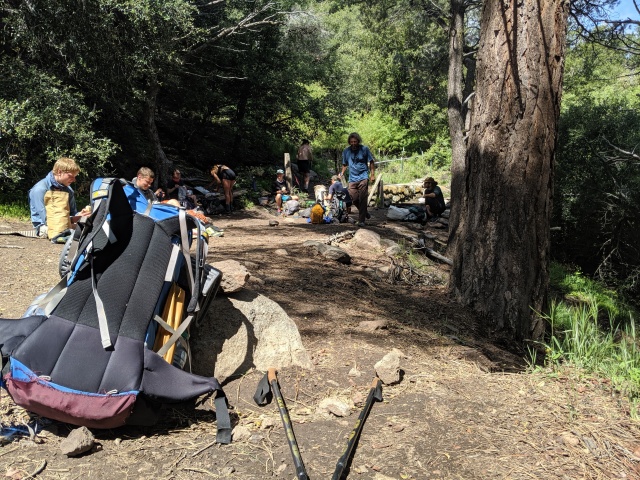 I filled up 4 liters as well as a half that I mixed in some Cherry Kool-Aid with. We had a pretty long break here. The two of us were the first to start hiking again, but very shortly, the herd of hikers behind us made their passes. Here’s some sites from this stretch (the orange flower is my first usage of Google’s “stylized” photos…I felt it more accurately showed it’s brightness!) 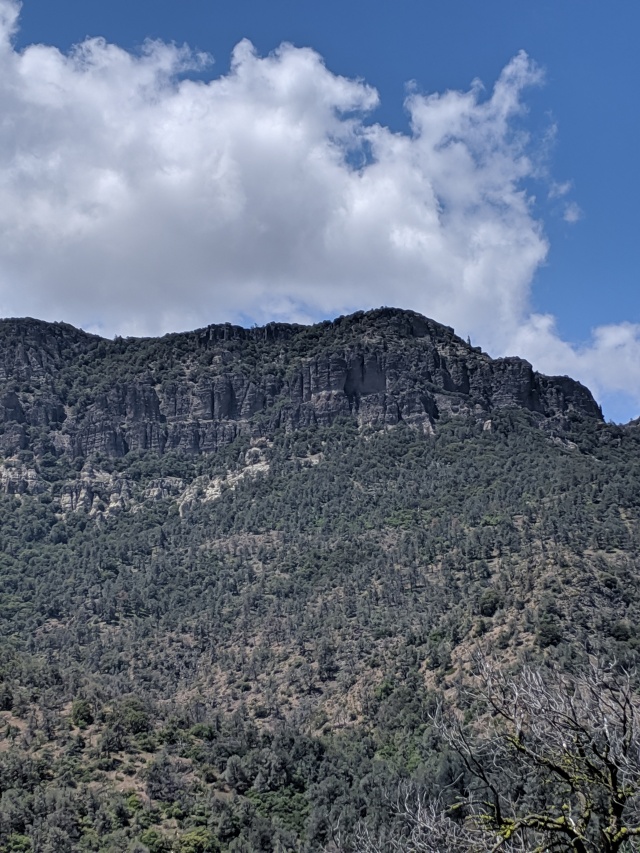 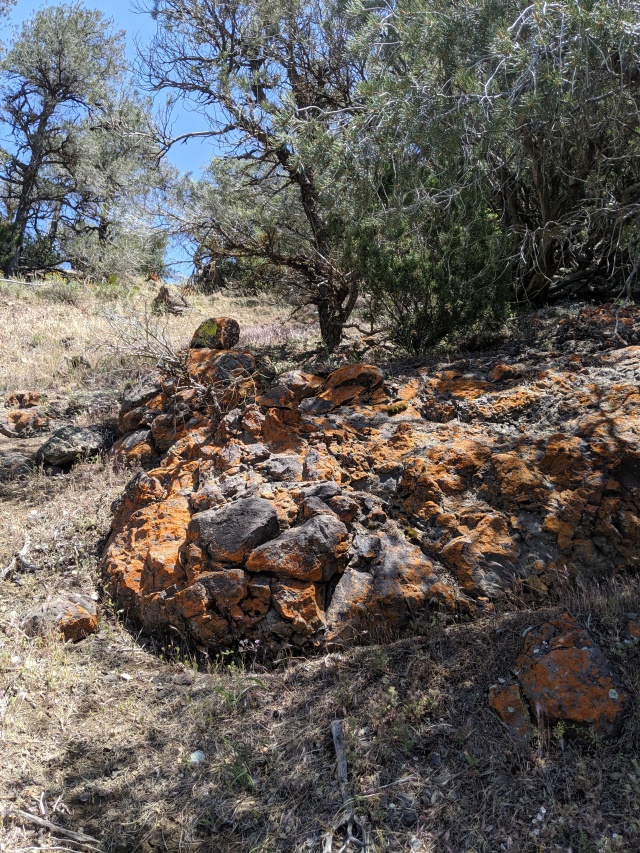 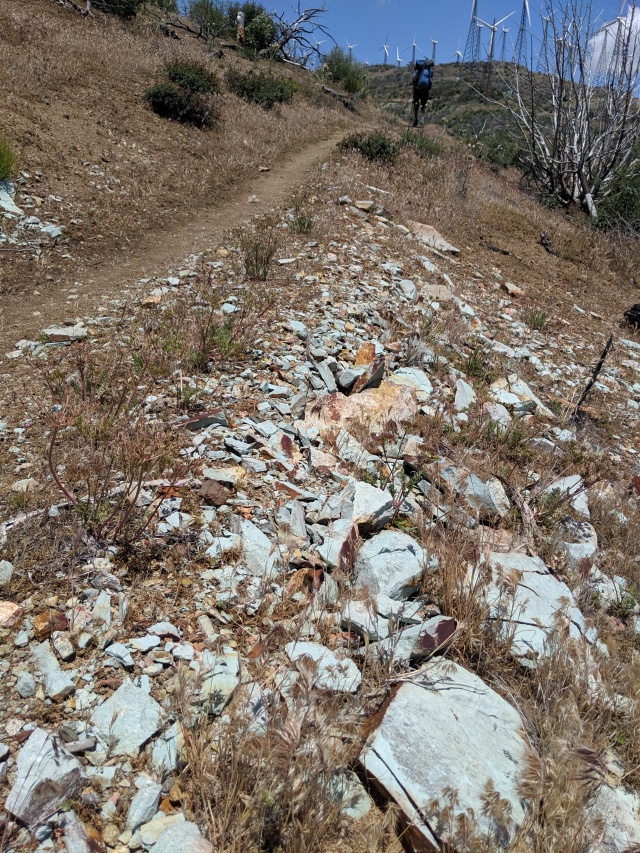 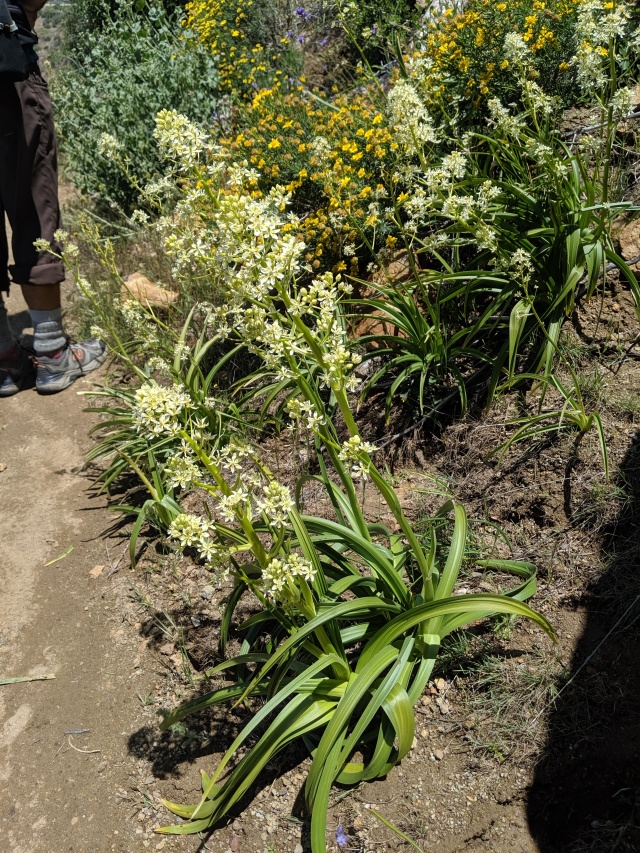 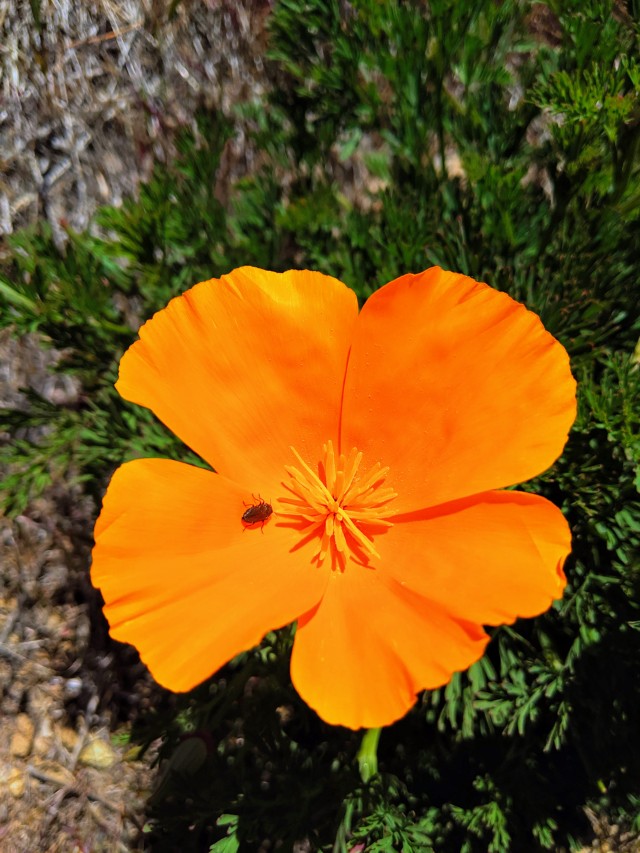 We had a late lunch (bagel from hotel with “pizza” ingredients) and then went on a bit further together to this large boulder. 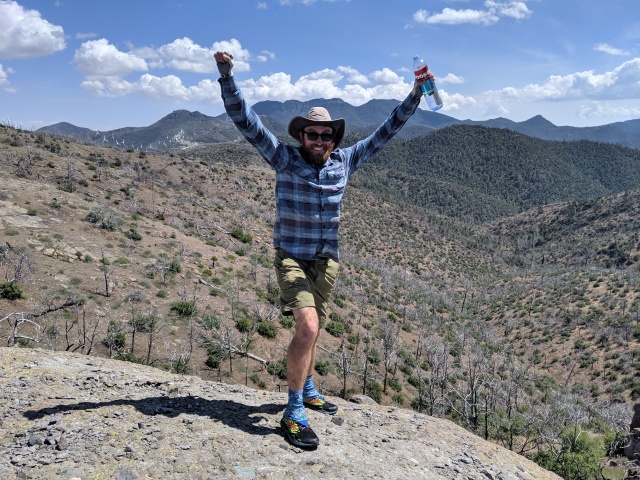 After this point, I wasn’t feeling very chatty and so went onwards with headphones on. I tried two different podcasts today. This morning I started the first episode of “The Liturgists Podcast,” which I’ll explain more at some point. Here though, I listened to “How I Built This” and learned about how Ben and Jerry’s Ice Cream got started. Very cool stuff.

At one point, I took a break with Kool-Aid and we discussed trying to get to Hamp Williams Pass for camp, which we both agreed sounded too similar to Hank Williams Pass and might need to be renamed as such. I went on ahead.

I kept looking up and seeing clouds getting darker. And as a result, my pace began to increase. I didn’t like the idea of walking in the rain again or setting up my tent in it. 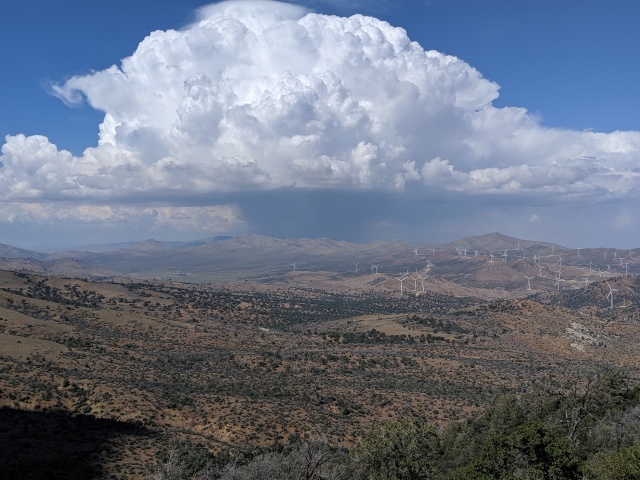 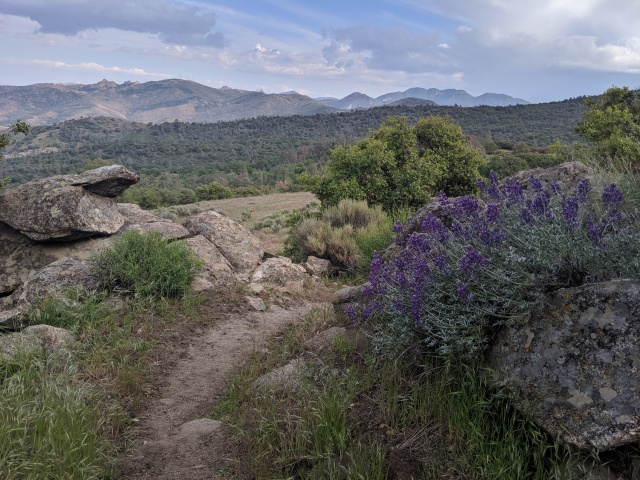 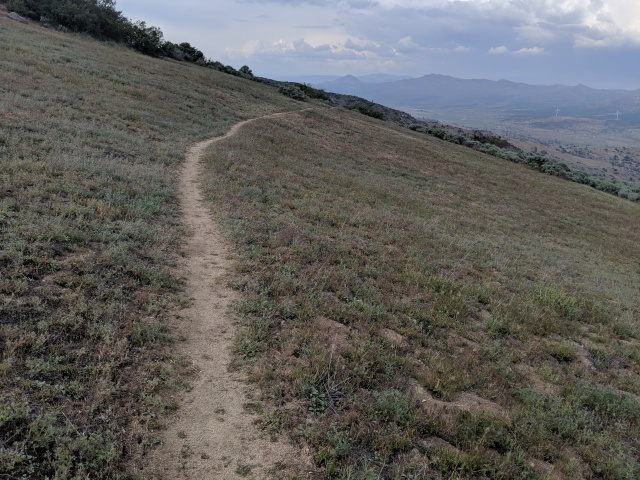 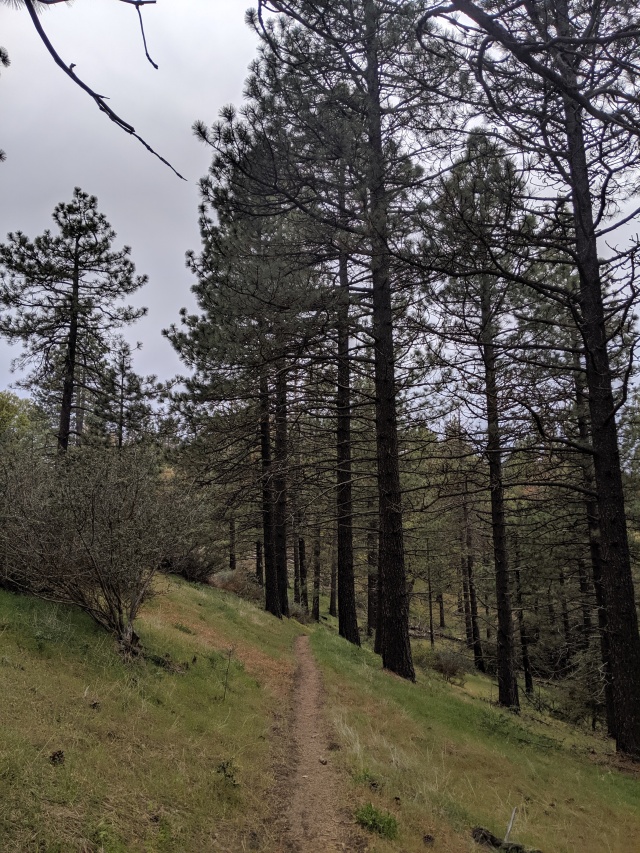 I think it was around 6:00pm when I reached the pass and found a place to set up. It was a bit off the trail, so much so that my tent wasn’t able to be seen from the trail. I didn’t end up seeing Kool-Aid so I’m guessing he stopped earlier on.

I cooked up some gourmet calorie enriched macaroni and cheese with spam, bacon bits, and olive oil added in. 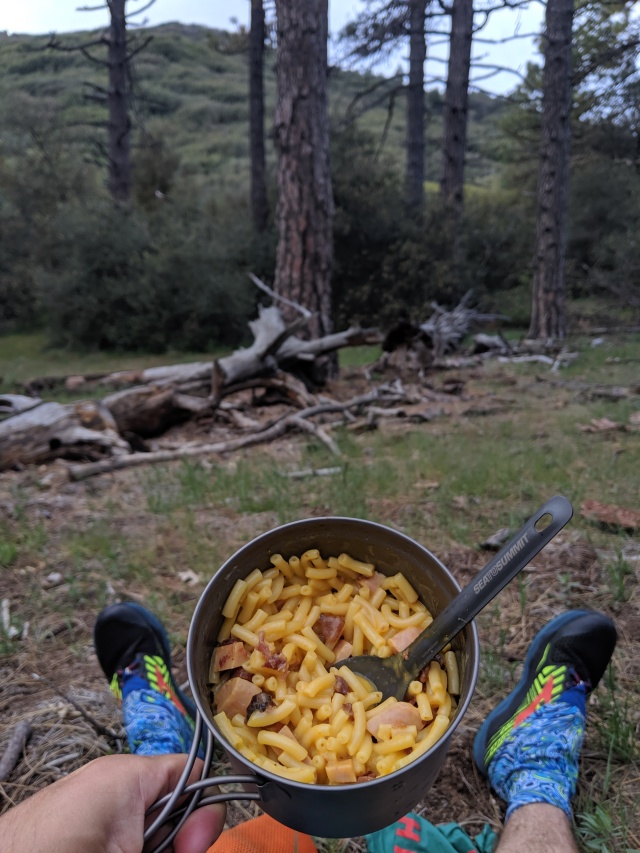 Then, retreated to my tent. It didn’t end up raining on me, but I fear tomorrow I might be in for some moisture.