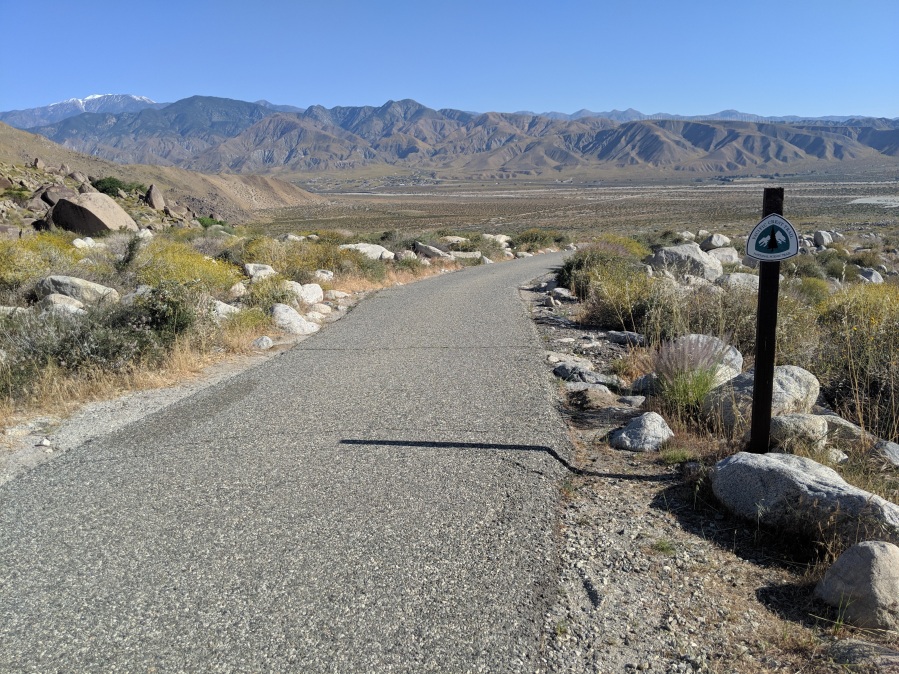 King Louie and the Trip to Cabazon

I forgot to follow-up in regards to the search for my lost friend, Sumi. At 8:21am yesterday I made the following post (along with his summit picture) to the PCT Class of 2019 Facebook group:

“Fellow hikers, I got to the top of San Jacinto yesterday (4/24)! The problem is, I accidentally left my comrade for the journey up there – a foam sumo wrestler called Sumi. He has traveled many places with me and was hoping to go to Canada. If anyone is planning to summit the peak today or in the next few places, it’d be real neat if you might grab him and maybe our paths would cross down the trail. If nothing else, it’d be getting some “trash” off the mountain! Thanks!”

We will see what happens…]

I was stirring in my sleeping bag around 5:40am. I felt like I was being loud and had to use the restroom anyway, so I snuck away from my fellow campers. I ended up on top of a large boulder nearby and watched the sun come up. I watched and took some photos, and then returned to the group.

I switched up my routine by cooking breakfast in camp! Bananas and cream oatmeal today, which was my least favorite oatmeal flavor thus far, still ok though. At 6:15, Matt began hiking…then at 6:30, Ally left…I was next at 6:45…and Stretch/Grinder planned to go at 7:00. We like to space fifteen minutes apart I guess.

We had three miles down hill to a water faucet. It went quick, I think I arrived around 8:00. Along the way I saw a new cool looking flower… 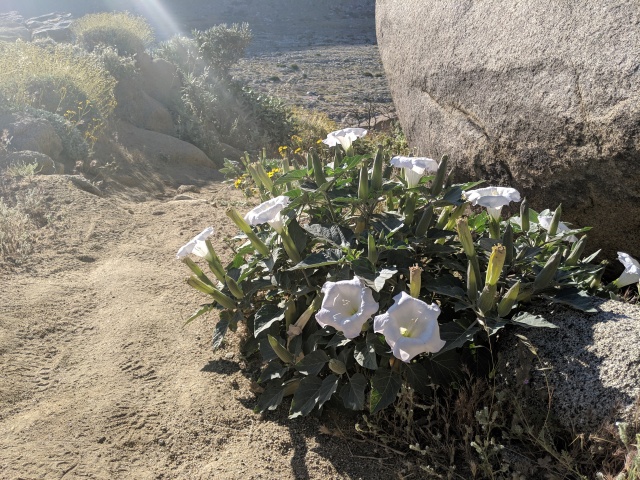 Another buried stone giant, possibly an ogre (kind of hard to make out), this time with just his head showing.

Got into the land of yellow flowering bushes: 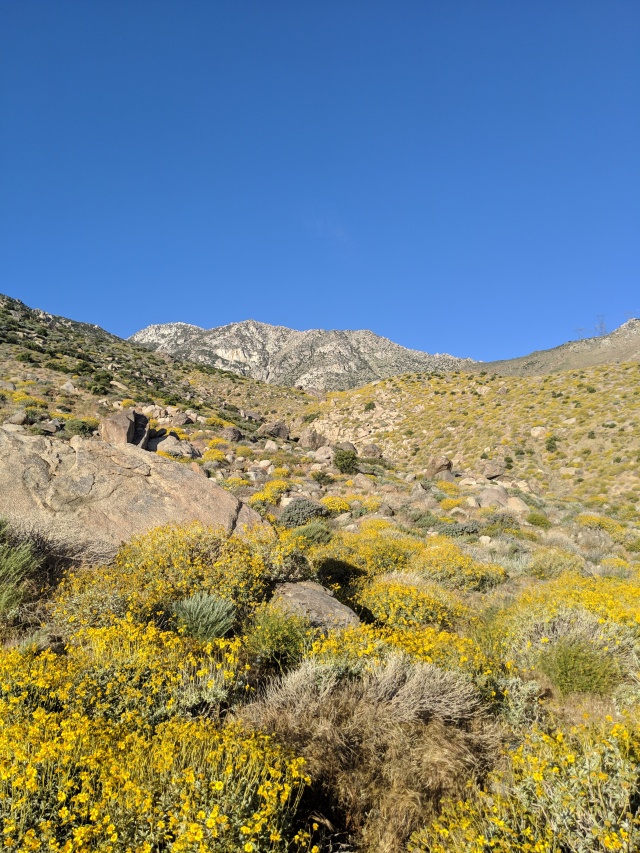 And I got to be in the presence of the lizard king, King Louie!

After water, we walked an asphalt path for a while and I waved goodbye to the San Jacinto area. It’s been real (this photo looks ahead not behind).

Once on the flat lands, things got hot, windy, and sandy. I kind of enjoyed this interesting setting, but others would tell me later they really struggled through here and weren’t impressed in the slightest. The wind was going directly against us and the loose sand most definitely was not ideal to walk in. You’ll also note that I’m following in the footsteps of a fellow quester of the hallows.

While resting in the shade of the bridge, a car drove right up next to us (not sure how he got there). A guy came out, and opened his trunk which had water jugs, apples, and oranges. His name was Bruce. He started the trail just days after dad and I actually.  He said he’d walked for two days and decided that was enough since he got some serious blisters. He said he may try again still. He left and took one fellow hiker with into town.

I had been in contact with my personal trail angel, Jim, who had offered to take me and fellow hikers to town at this junction to get In-And-Out, a Californian classic. So, around 11:30am-ish, Stretch, Grinder, and I made our way up to the side road and soon later there came Jim. 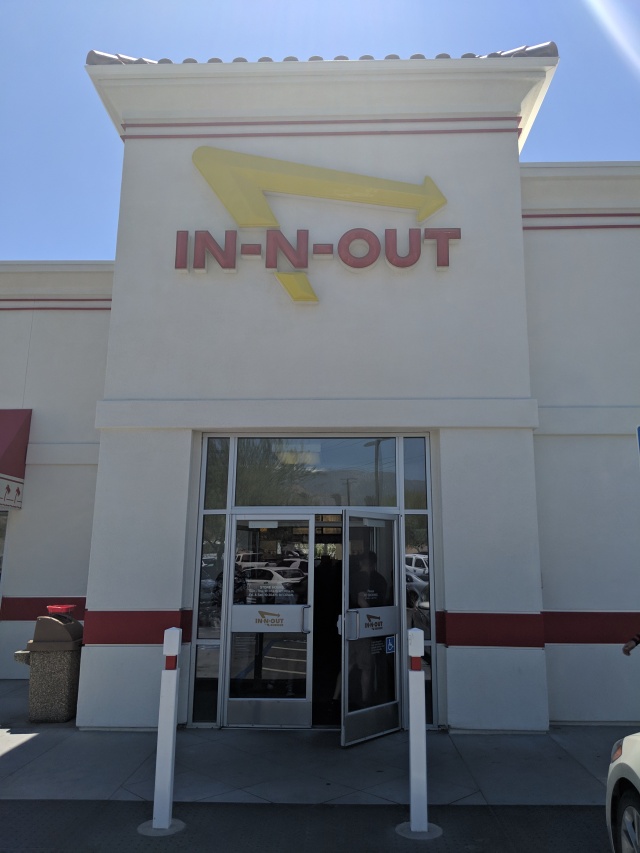 The cars air conditioning was wonderful and in no time we were at the Cabazon In-N-Out!  Jim’s wife Chris and grandchild Bryant were already there saving tables for us too. I got a double cheeseburger with onion, fries, a root beer, and a vanilla shake. The food lived up to the hype! And we loved the conversation talking with the Nydams (photo credit goes to Jim)! 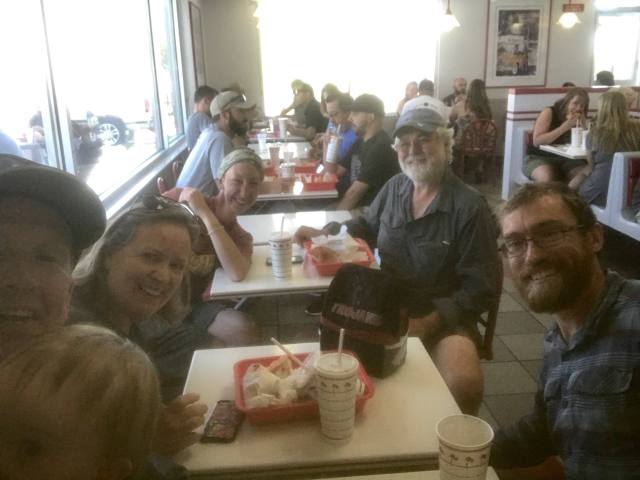 Afterwards, I walked with Stretch over to the gas station to get some water and additional snacks to add to my food bag. Meanwhile, Jim and Chris were on a separate mission to help other PCT hikers they’d bumped into to find and bring them to a shoe store (blisters I believe). After all that, Jim carted us back to the trail, snapped some pics, and said happy trails. Much thanks we had for them! So very nice to keep showing up for me! 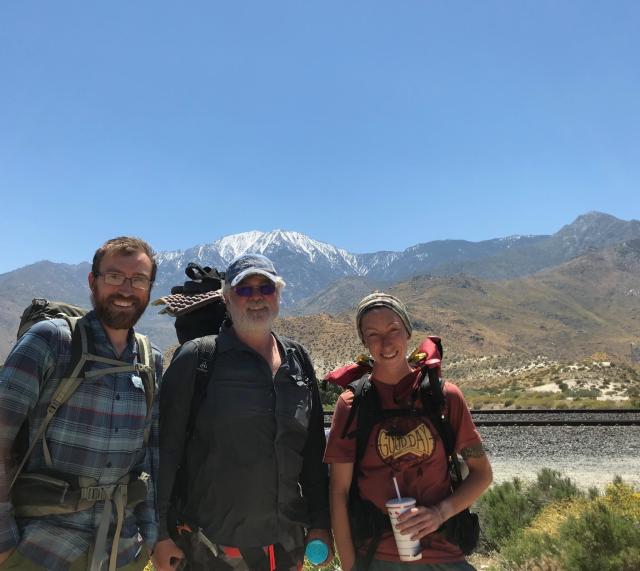 The one minor setback of the whole deal was that I left my elusive hat in the car with Jim… apparently I struggle to keep that thing on my head.

I stayed for a bit in the shade and got one post sent out to you lovely readers. While waiting, others came and went. Most went into town for a visit. Ally and Matt had gone in to town before us and were there. And Snickers and Blue Jay and Lisa showed up. I set out solo around 1:45pm-ish.

I had a new look without my hat… 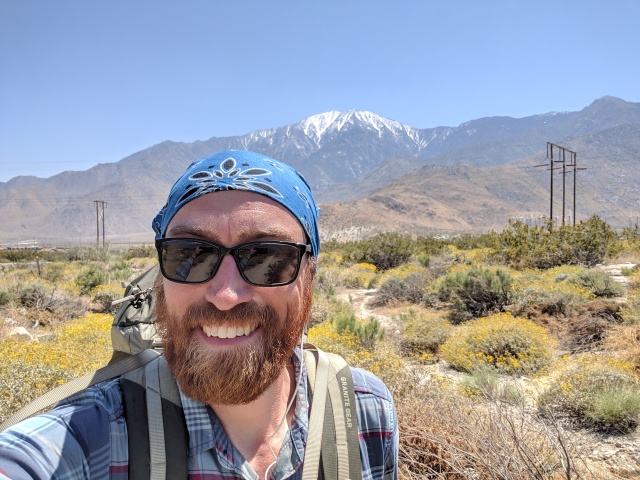 Into a whole new world I walked, the land across I-10…a new fantastic point of view. No one to tell me no, or where to go, or say I’m only dreaming. A dazzling place I never knew. Unbelievable sights of yellowing flowering bushes and indescribable feelings.

(Ok, so maybe not all the much of a new world from the other side of the highway yet).

Soon, I wound my way up to some wind turbines. Only a few were turning for some reason. About this time, I caught up to Ally and Snickers, who were taking a break in the shade. Ally was having blister problems, so was wrapping up with leuko tape (what folks say to use instead of moleskin). I proceeded past after talking a bit, then battled my way up this canyon. 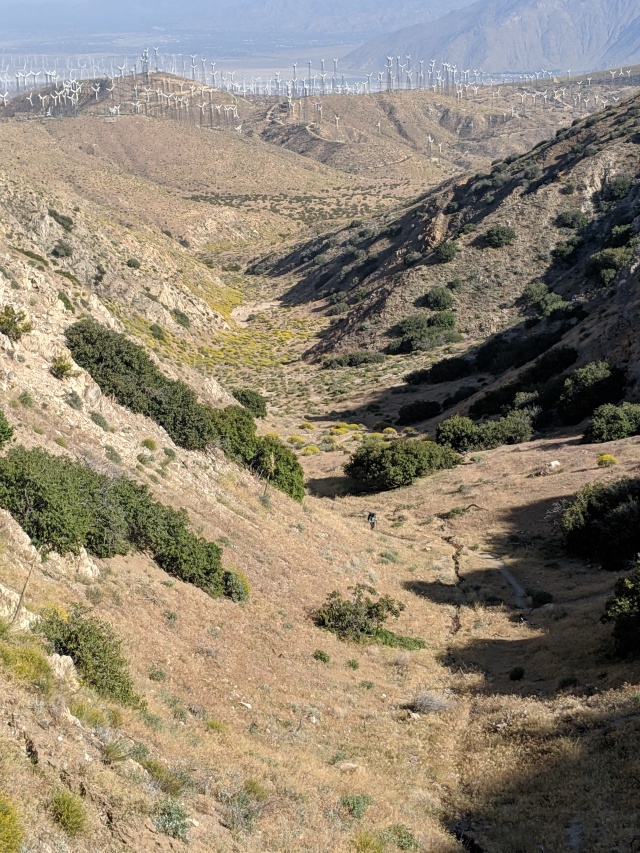 Maybe this is the whole new world! Hokey Pete. Amazing view. And then, saw this oddity. I later heard it was just on a vine, not the tree itself, and some sort of wild “cucumber” plant.

At one point, we came across a stream that wasn’t on our water source list. I was low, so was going to fill up. I walked upstream to try and get a good spot to fill up and came too stinking close to this guy…

Sheesh. I did a nice jump up, and classic u-turn run maneuver away from him. I’m getting way too familiar with these guys. Then filled up my bottle right by the trail. Snickers and Ally showed up soon after and we walked the rest of the way together. We were crushing it and got some serious miles in. It was such a beautiful setting too, with a kind of grassland meadow hidden among the surrounding rocky mountains above.

Snickers got his first twenty-plus mile day! Towards the end of the day, we came out to this river valley.

We soon reached the valley floor and walked a mile “up,” before making our camp. 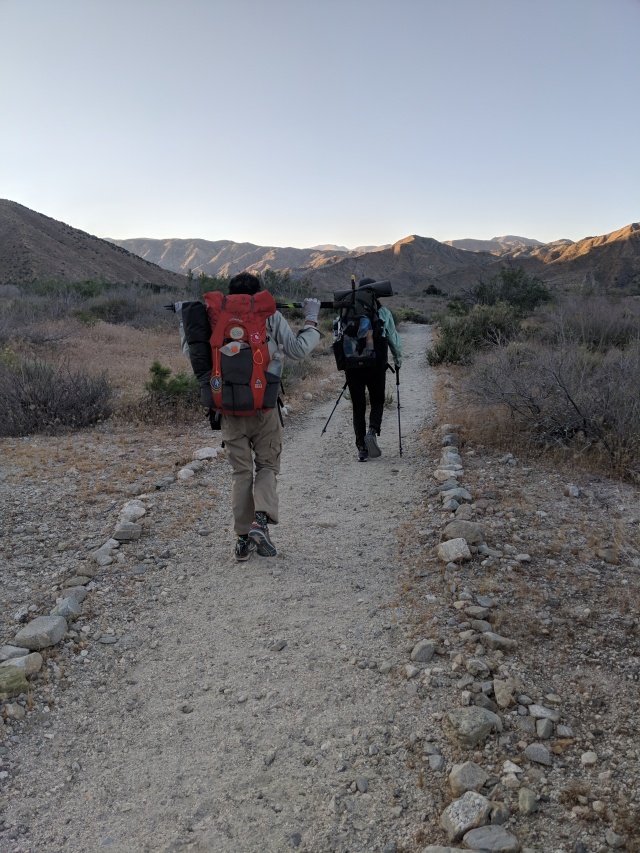 I got to chat with Ally here since I hadn’t much yet and learned she’s from Minnesota, but had been living in Virginia working as a crime detective for the last while. The three of us stayed outside our tents and searched for constellations, something I plan to make a goal of…to learn more during this trip!